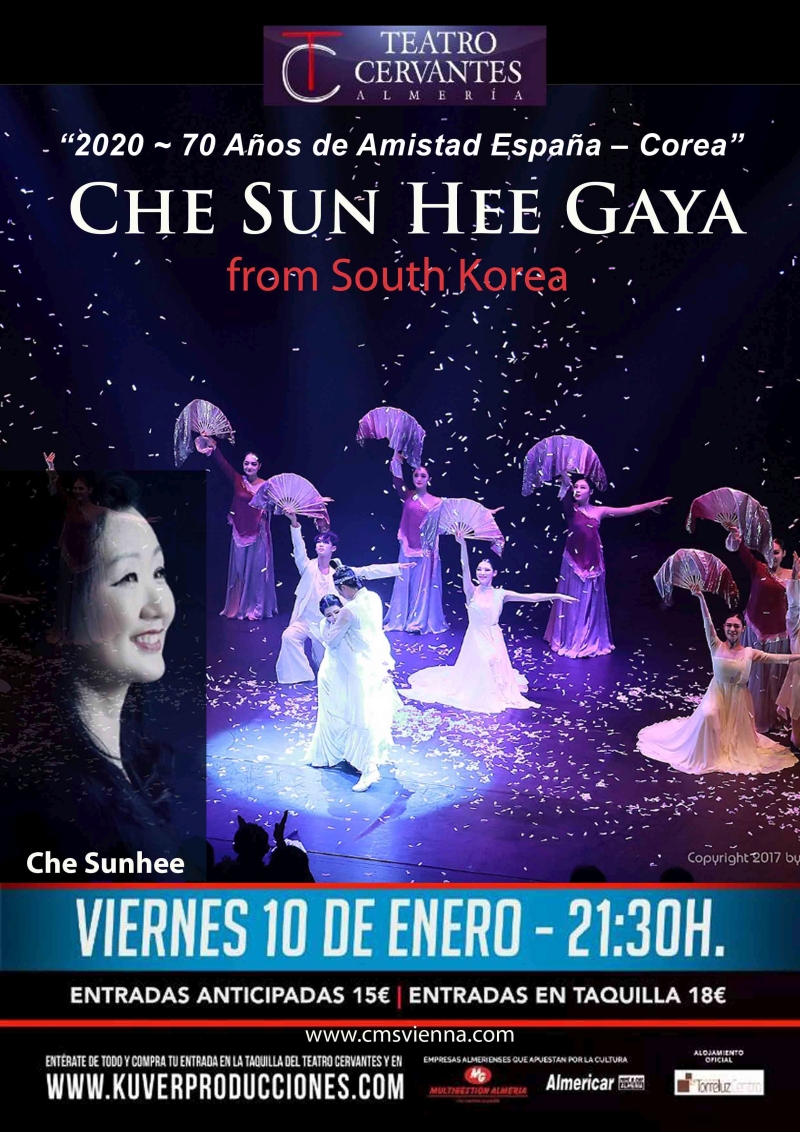 The Che Sun Hee Kaya dance group comes from “Kaya”. Kaya is the coastal area
of the South Eastern part on the Korean peninsula (close to the city of Busan).
The leader of this dance troupe is Ms. Che Sun-Hee, she is a famous Korean dancer.
She won many prizes for her dance performances. Che Sun Hee is teaching dance at
universities in her home town “Kimhae” and she is also a well known Korean choreographer.
Besides in Korea, she performed in China, Japan, United States of America,
Brazil, Czech Republic, France and others …

Taepyeongmu (태평무; literally "Great Peace Dance") is a Korean dance with the
function of wishing a great peace for the country. Its exact origin is unknown, but Hahn
Seongjun (1875–1941), a well known Korean dancer and drummer, rearranged the
dance in the early 20th century. Regarding the origin of “Taepyeongmu” it is assumed
that this court dance was occasionally performed by kings during the Joseon dynasty.
Therefore, the costumes used by the dancers are similar to the Gwanbok ( literally "official
clothing") formerly worn by Korea's kings and queens.

Sogochum (소고 춤; literally „Small Drum Dance“) is one of the most popular
solo performances in Nong-ak (farmers music). The sogo (a small drum) used in this
dance, is about 35 cm in diameter. The drum is held together with a knob with the lefthand
and is beaten on the drumhead with a firm stick with the right-hand. The Nong-ak
band features the sogo as a dance prop as well as a musical instrument. The sogo players
usually occupy the front line on stage, with the solo performer leading.

Talchum (탈춤; literally „Mask Dance) is nowadays accepted as a general term
for mask dance drama. Korean mask dance dramas are not just dances performed by
masked dancers but also include significant dramatic content with masked characters
portraying people, animals and sometimes supernatural beings. These folk dramas reflect
the frustrations felt by the lower classes towards the Confucian literati Yangban,
due to the latter's treatment of the commoners, show the life of the common man and
process social problems such as monks who ignore their precepts and men who cast off
their old wives.

Sarangga (사랑가; literally „Love Song“) is one of the most famous aria from the
traditional Korean opera “Chunhyang-Jeon” (literally „the story of Chunhyang“,
Chunhyang is the name of a girl, the main character of the opera). The dance
“Sarangga” is a modern choreography of this famous “Love Song”.